Briefing 3.2 - Why verbal, physical and sexual harassment is so pervasive in global production

Better Work: Relationship between factory characteristics and the incidence of sexual harassment

Baseline worker surveys carried out by Better Work country programmes show that workers in garment factories are often vulnerable to threats of abuse and sexual harassment. Better Work has identified some factory characteristics that lead to a lower or higher incidence of sexual harassment.

Understanding that there are specific reasons why gender-based violence is pervasive in global supply chains is an important starting point for building strategies and practical initiatives to address such practices. 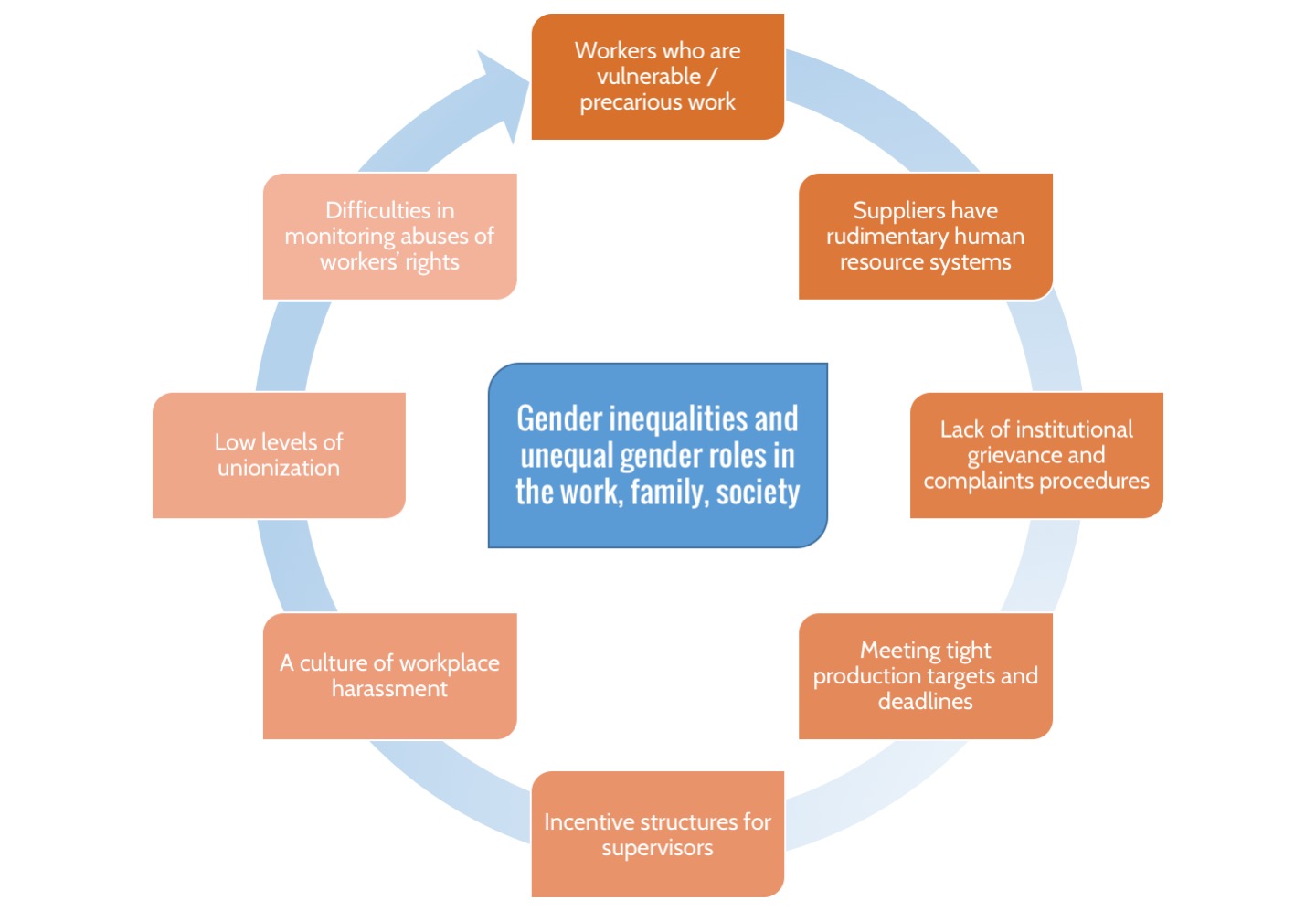 As discussed in Module 2 workers are exposed to risks when they work in insecure and precarious forms of employment, work alone or work outside of standard working hours. Where there is limited protection against discrimination and little bargaining power, the risk of violence and sexual harassment in the workplace increases. Women in precarious work and on short-term contracts are the least likely to report violence due to their vulnerability. Women in precarious work often include migrant workers, indigenous people, young workers and unskilled workers.

Case Study 3.1 looks in more detail at the vulnerability of immigrant farmworkers in the US.

In agriculture and horticulture many workers are employed for long periods on a casual basis, often on temporary or seasonal contracts that are renewed monthly. A general lack of rights, including rights to paid maternity leave, a living wage or reasonable working hours increases women’s vulnerability to sexual harassment. For example in Kenya insecure temporary horticultural workers were granted permanent status if they agreed to have sex with supervisors or managers. (Cited by Ethical Trading Initiative, 2005)

Women working in factories or on agricultural plantations who live in company accommodation can be further exposed to gender-based violence. Many are young migrant women who cannot change jobs because their accommodation is tied to their work. The accommodation may be some distance from the factory/plantation along an unlit path, which poses dangers for workers walking back after late night shifts. Home-based workers, such as women and children carrying out piece-work in the garment sector, experience isolation and risk of sexual violence from supervisors or agents.

Sexual harassment against women in the workplace serves to reinforce or maintain existing hierarchies and gender power relations. For example, women may be reluctant to take up a job in a male-dominated occupation or apply for a promotion because of a real or perceived threat of harassment or violence, thereby perpetuating segregation. (UN Women 2015, p.92)

For many suppliers putting in place policies and procedures to tackle sexual harassment is a relatively new issue, particularly where human resources systems are rudimentary. Good procedures ensure all employees are informed of what is acceptable workplace behaviour, which may in some countries conflict with locally accepted social norms. Human resources policies and procedures, if they exist, are rarely suitable for dealing with highly sensitive and personal issues such as sexual harassment or violence.

Workers in factories and farms where there is no union have little chance of independent support or representation. Worker elected committees, such as those required in Indian legislation, are unlikely to be independent of management pressure and young and inexperienced workers may not appreciate the need for absolute confidentiality about the names of complainants and the nature of complaints.

If there are no or limited grievance and complaints procedures, women will often remain silent to avoid the risk of losing their livelihood and exposure to further violence. (DFID 2015a) In addition, issues of a sexual nature have the potential to cause lasting reputational damage to both women and their families, sometimes fatally damaging young women’s marriage chances.

A report by the Bangladesh AWAJ Foundation and AMRF Society (2013) found that in the ready-made garment industry women rarely reported sexual harassment because of a lack of formal grievance and complaints mechanisms. The survey highlighted some of the problems in gaining accurate information on gender-based violence and led to discussion about how to avoid under-reporting of gender-based violence in future research.

There is no way for affected workers to convey complaints. In this context the response of “doing nothing” in the face of abuse might be a “strategic indifference” and a rational way to react. Without any system in place that could provide sufficient bargaining power to break through the oppressive structures of social and sexual hierarchy, what could the complaint of the worker possibly lead to, if not to more harassment? (AWAJ Foundation and AMRF Society, 2013, p. 50)

Women workers may be at greater risk where tight production deadlines require workers to carry out long hours and overtime. (Better Work, undated) As well as impacting on their health and wellbeing, women have an added risk of sexual harassment and violence getting to and from work in the dark. (Action Aid International, 2013) Long working hours and overtime are commonplace in many production workplaces. In Bangladesh, for example, many garment workers have to work 14-16 hours shifts each day (often six days per week). In Pakistan workers have to work ten or more hours a day. Excessive (often compulsory) overtime can be the result of late production changes from brands and supermarkets or factory owners who are reluctant to or are unable to hire additional workers. If workers refuse to carry out overtime they often face penalties, harassment, verbal abuse and dismissal. (Institute of Development Studies, 2006; FWF 2014; Better Work, undated).

Research by Better Work (Truskinovsky, Rubin & Brown, 2013) shows that the structure of the supply chain, resulting in buyer pressure or payment systems, can exacerbate the incidence of sexual harassment. As production pressure builds, managers become more abusive in an effort to speed production, and as an outlet for the stress of meeting demanding targets. Lead companies that demand large production targets at short notice or negotiate very low prices contribute to the risk of workers being exposed to long working hours and workplace harassment and violence. High levels of competition places additional pressure on managers to satisfy buyers, and ‘Fast Fashion’ can put intense seasonal pressure on factories to produce unexpectedly large quantities of a popular item.

In India, Viet Nam and Costa Rica workers were forced to work overtime and managers reported that they struggled to meet the provisions on workers’ rights due to the need to meet tight production deadlines. In Costa Rica workers commonly work a 60-hour week with no premium on overtime hours, as they are paid by piece/task. In Viet Nam factory workers complained of not being given notice when overtime would be required and in India factories had increased working hours because of shortened production deadlines. Some workers reported they were not paid a premium for all overtime hours worked, and that breaks were no longer counted as working hours. (Institute of Development Studies, 2006)

Incentives for supervisors may play a role in increasing risks of sexual harassment. Better Work research (see box below) found that supervisors’ incentive pay systems, were based either on the performance of the workers they supervise or on the basis of production line incentives or bonuses. If these incentives are very demanding or if production targets are difficult to achieve, this can result in a culture of sexual harassment. Because the majority of supervisors and managers are male, there is a hierarchical structure in which supervisors have considerable power relative to the workers, who are predominantly women.

If a salaried line supervisor who is predisposed to harass is given the power to certify whether a worker has met a production quota that affects the worker’s pay, the supervisor may use this power to demand sexual favours in exchange for approving the production bonus. (Better Work Briefing. Garment Factory Characteristics and Workplace Sexual Harassment, p.2)

The impact of sexual harassment on performance and profits

Research carried out by Lin et al. (2014) of apparel factories in Haiti, Jordan, Viet Nam and Nicaragua participating in the Better Work programmes found that sexual harassment is pervasive in garment factories and has a negative impact on performance and profits. These finding suggest that the structure of incentives is important in creating vulnerability to sexual harassment. This can be overcome with objective criteria of work effort as a basis for performance-related pay, thus reducing the level of discretionary power a supervisor has over a worker. In addition, creating an understanding of sexual harassment and changing organizational norms is also important in reducing levels of sexual harassment.

Overall, the study found that there are strong incentives for firms to control the incidence of sexual harassment in their factories, particularly as this will have a positive impact on retaining workers and enhancing productivity.

f) A culture of workplace harassment

"It is good that we know now what is right and wrong according to harassment definition, also good to know that such acts of harassment are forbidden and punishable in law, but who applies law in factories? If our management does not understand it, our knowledge will create further frustration." (Supervisor attending FWF training)

"We are also exposed to harassment from our superior line management. If all staff are not educated and if top management does not integrate the practice willfully, hardly anything will change. We do not want to scold workers, we are forced to do so, since is it taken as our performance."

Risks of sexual harassment and violence are highest if women and men do not have the opportunity to collectively organize to address violence. In many of the factories and farms at the bottom of supply chains unionization is very low. In the garment sector there is often intense hostility to unions. (ITUC, 2015) Participatory approaches to involve workers in discussion and dialogue, including collective bargaining and human resources policies, are crucial in addressing workplace gender-based violence. As the ILO argues: “the strong commitment of both trade unions and management is instrumental in progressively reducing the incidence of workplace violence.” (Cruz & Klinger, 2011, p. 14)

It is in the farms we find the most vulnerable women workers. They have many problems; they get violated in so many ways on the farms. Many are migrant workers; they came to look for better opportunities. They work because they have to, they often don’t have much education and poverty is rife in the farm areas. The trade unions bring a collective power for women workers. When you organize the women together and mobilize them you can find out their needs and get issues like sexual harassment addressed. Women don’t know that what they experience is sexual harassment, we need to ensure that women know what is going on and then we can advocate in the workplace to make sure women are safe at work.  We can deal with sexual harassment when we hold each other’s hands – unions give us the space to do this. (Nolukho Matanzima, South Africa National Council of Trade Unions. Participant in the Global Gender Academy workshop on gender-based violence in global supply chains, November 2015)

Where unions do exist, they may not include sexual harassment in bargaining agendas. Factories and farms at the bottom of global supply chains often recruit young migrant women with low levels of education, who are not an easy target group for union membership campaigns. There is a very high turnover of workers, making union organizing and retaining members even more challenging. (See Module 8 for examples of union action at local levels and collective bargaining).

Because many lead companies and brands source suppliers from multiple companies, it is difficult to monitor working conditions and build long-term relationships with factory or farm owners to improve working conditions. Workers’ rights are also affected by labour laws and industrial relations systems, which vary from one country to another, for example, on the right for workers to organize and to be represented by trade unions (freedom of association and collective bargaining).